On Saturday we went up to Cambridge to see my daughter get her MA. For those of you who don't know the university website states that this is conferred by right on holders of the BA degree of the University not less than six years from the end of their first term of residence, providing they have held their BA degree for at least two years. My daughter put it this way 'You work for 3 years for a degree and 4 years later they give you another.' This ancient system exists only at Cambridge, Oxford and Dublin.

So what is the point of it? According to the university site it gives the right to: However I see it as:
On a practical note my son-in-law, who received his MA last year, told the Senate House doorman that he was a senior member of the university as we entered to see my daughter receive her MA and we were shown a reserved front row bench. Part of the proceedings, which were in Latin, were then addressed to him as representing the body of the university.

Here is a picture of my daughter and some of her frinds proving that my third point is correct. 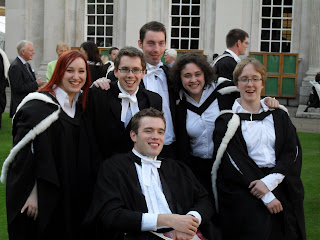 Posted by Still Breathing at 22:10