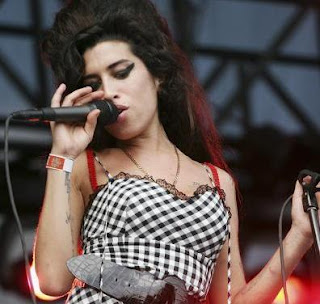 Today Amy Winehouse died at the tragically young age of 27.  A rare talent that never got near to fulfilling the potential that she showed when she burst onto the music scene; another member of the 27 Club.
As one who has had to face up to an alcohol problem, admittedly not as bad as her apparent drug problems, she has my sympathy. You continue doing something even though you know it is bad for you and bad for those around you because...? You don't know why. But it has a hold on you that you can only break when you admit you have a problem; not just say you have a problem but be honest with the inner most core of your being that you have a problem. At that point you have a chance of breaking the grip and being free again.  It is no good others telling you that you have a problem because the thing that grips you stops that message getting to your core; stops you admitting it to yourself.
I was lucky as I had a breakdown and ended up on medication that meant I had to stop drinking but even then it took me a year to get to the point where I could honestly face up to what I was doing to myself and those around me. I was able to make that step but tragically Amy Winehouse either didn't or couldn't.  So tonight I hold her in prayer before a loving God, praying that in His love He will take and hold this broken child of His creation giving her the love and peace that evaded her in this world.
Posted by Still Breathing at 21:48 1 comment:

Many years ago when I was at school (I left in 1972) I heard talk of something called the ecumenical movement whose aim was to bring all the churches together.  For many reasons that hasn't happened not least because it seemed to be a top down attempt to force people into unity.

A few years ago I was the Churches Together in Beckenham treasurer and while we did manage to work together this was done by agreeing on a small set of common beliefs (the Apostles Creed) and ignoring our differences.  We used to joke that it was easier to get the Baptist, Roman Catholic, Methodist and United Reformed churches to work together than it was to get all the different Anglican churches to stay in the same room. Progress was made in that we found we could work together and the idea that you were in a denomination for life was weakened, even if it is still with us.

The problem I see now is that we have formed cross denominational groups which share a common theology and getting these groups to work together, or even accept each other, is possibly harder than working across the denominational divides.  At it's simplest this means liberal and evangelical groupings (but I suspect it could be broken down a lot further) and some of these groupings don't accept that the others are really Christians and others look down on the rest as intellectually inferior.

The ecumenical challenge we face is the task of accepting each other exactly as we are instead of looking for a small set of common beliefs.  For example this means biblical literalists have to accept that Christians who do not share their belief are not 'bad Christians' and those Christians in turn must accept that the biblical literalists aren't intellectual idiots. I am under no illusion that this will be easy but I do know where to start, I have to start with me.  If all Christians start to treat each other with love and respect just think what a difference that would make.
Posted by Still Breathing at 23:29 No comments: