The sad news that a British Baptist minister has been charged aggravated sexual battery in the US will, I hope, stop protestant churches pointing the finger at the Roman Catholic Church over these issues.

I hope it but, unfortunately, I'm not over optimistic.
Posted by Still Breathing at 17:35 No comments:

I read this on the tram on the way to work (no - I wasn't reading Nietzsche but this was quoted in a book) and immediately thought about how it lined up with what I think Christianity is all about.

We may say we are sure of things, our salvation, the resurrection, etc, but what really mean is that our interpretation is that these are facts and that we are prepared to put our faith in them. In doing so we open ourselves up to the biggest mystery of all, that God loves each and every one of us.
Posted by Still Breathing at 08:36 No comments:

I have long been a Pink Floyd fan and knew that some of their work was about break downs and mental illness but I never thought that I would find that they had described my situation so well.

However part of Dark Side of the Moon was going through my head the day I was admitted to hospital following my breakdown. I don’t know why I thought of it but at the time it just seemed right. Looking it up I seem to have merged 2 verses together from the track Brain Damage because all that went through my head for several hours was this:

Not only did they feel right at the time but looking back they are so accurate. I had so lost contact with reality that it was like being in a band where everyone else was playing a different piece of music, I felt as if my head had exploded and all the while I was screaming inside – where no-one can hear.

While I was in hospital I began to improve but I felt as if I was walking in a dream and that all my emotions were happening at a distance. I became fairly content with my lot but I wasn’t feeling anything properly; I began to think of myself as Comfortably Numb – the title of one of the tracks on the Pink Floyd album The Wall.

When I left hospital and entered a period of counselling I began to realise that I was more like the central character in The Wall than I realised. Like that character I had gradually withdrawn into myself until I had no real deep contact with anyone but myself. As a result I was only looking at life from my point of view; it was me against the world and I was always right.

Gradually the reasons why I became like this began to surface, going back to my teens and before, but without, as far as I could see, anyway of dealing with them. Then, quite suddenly, a couple of things happened that moved me forward so fast it surprised me. My counsellor saw the change and believes that I have got as far as I can with this treatment for now so next week will be my final session. I may need more sessions in the future but for now I should be able to get on with my life without it.

In Pink Floyd terms it could be described as my walls coming down but to me it feels much deeper. I feel like a new person. I can look back at how I behaved and treated people and now see that I was wrong, I can feel sorry for what I did but I can’t regret it because that was how I was and not how I am. To use a Biblical phrase I feel as if I’ve been born again.

I don’t expect like to suddenly become perfect, I know that there will be ups and downs but I now understand myself better and believe that I should be able to cope.
Posted by Still Breathing at 22:13 1 comment:

The other night I was stir-frying dinner when I asked my wife if should prefer a bread roll with it instead of rice or noodles. She looked at me as if I had gone mad and told me that she didn't think a roll was a sensible suggestion.

So I looked straight at her and said:

Time for an update. Put briefly I am back at work and still taking fluoxetine - but that doesn’t tell the whole story.

These days the Home Office makes us print out our own pay slips but not being in the office I have been finding out how much I was paid by checking my bank account on-line. Now I knew that I had been off sick a lot and was expecting my pay to alter at some point but I was assuming that I would be told first. Imagine my surprise then to find I had hardly been paid anything!

Luckily I had to go into the office the following day (more about that later) and so managed to print out my pay slip only to find that I had been put on Nil Rate pay – retrospectively! So not only was I only being paid statutory sick pay but I also owed them money! As I had other money in bank account I haven’t gone overdrawn but I have paid out money that I wouldn’t have spent if I had known about this in advance.

The surprising thing is that through all this I have remained calm and have not rushed back into a pit (or box) of despair. The reason is that the fluoxetine seems to be working without making me over tired and I have made a lot of progress in my counselling sessions.

In my post about Drifting With the Tide I talked about how I was waiting for something to happen so I could move forward and my pay situation was the second of them. Needing some money to live on I went back to the GP to discuss going back to work and it was agreed that I should do so starting last Monday. It did feel strange and not all the issues that have impacted on my mental health have been resolved but at least it was a step in the right direction.

The first thing that got me moving again was a ‘phone call from my line manager about a redundancy scheme currently being offered. It was that which meant I had to go into the office to discuss it with my line manager and that showed me that I was able to get back into the building – something I had doubted I would manage. I have applied for Voluntary Early Retirement but there is: a) no guarantee that I will get it and b) I may not be able to afford it but it might be the direction I should be going.

All in all I am a lot better and can distinctly feel the hand of God pushing me forward; but to where I have no idea.
Posted by Still Breathing at 15:40 No comments:

My local supermarket is at it again. Last Monday I noticed this sign: 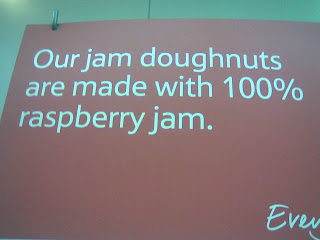 What puzzles me is how they make doughnuts without any dough or sugar! Obviously they do because the sign says they are "made with 100% raspberry jam" - nothing else, just raspberry jam. Needless to say I played safe and bought custard doughnuts instead.
Posted by Still Breathing at 23:01 No comments:

With all the fuss going on about meat and milk from cloned cows entering the food chain another health scare has largely gone unnoticed.

Scientists have discovered that the hole in a doughnut and the hole in a toilet seat have exactly the same chemical composition. It is not yet known whether this is a coincidence or whether there has been some cross contamination.

The health implications are not yet clear and, although no cases of someone falling ill from this source have been reported, the government is taking a cautious line and asking the public not to use toilet seats until it can be shown that they do not cause a fatal level of obesity.
Posted by Still Breathing at 14:47 1 comment: