I am writing this with less than 2 hours of 2010 left and what a year it has been. Firstly we had the planned happiness of my daughter's wedding (which went very well) and then later in the year my wife and I celebrated 30 years of marriage and on the next day she had a significant birthday (I'm not saying how old she is but she can now use SAGA.) For these last 2 we were at Greenbelt but we also treated ourselves to a week in Venice in October to celebrate.

These were all expected events but there have been some surprises this year as well. One really big surprise was our son getting engaged to be married next year - he wasn't even going out with her in April when our daughter got married but she is lovely and both families think they are doing the right thing.

I started the year on sick leave with depression and although I did get back to work I couldn't handle it and took the option of early retirement when it was offered. In my mind I had planned to work until I was 65 but I found myself retired at 56 with very little pension until I'm 60. Still I'm sure I did the right thing and God is leading me somewhere.

The big shock of the year was the deacons constructively dismissing the ministers; something that the church failed to reverse at a special church meeting. This has hit me hard (but not as hard as them) as not only are they friends but I was growing spiritually under their guidance.

What the future holds (apart from my son's wedding) for me I have no idea but I'm beginning to get the first hints of God leading me into something. I have no idea what so it is a case of watch this space. My current plan is to start looking for part time (2 - 3 days a week) work in January but God may have something else in store for me.

Finally I want to wish a Happy New Year to anyone who happens to read this.
Posted by Still Breathing at 22:17 No comments:

I know I haven't updated for a while but my depression has been been dragging me down and sapping my energy.

Anyway what I wanted to say was that I have just finished reading one of my son's college text books "The Pre-existent Son: Recovering the Christologies of Matthew, Mark and Luke" - snappy little title isn't it! Why did I read it? Because it looked interesting. Did I understand it all? No way but I did get the general gist of it.

The central argument of the book hinges around Jesus saying "I have come to..." (or occasionally demons asking why her has come) which is a phrase that supposes purpose in coming from one place to another. By using this phrase Jesus makes plain that he has come to earth from heaven therefore he must have existed prior to His incarnation. This pre-existence is, of course, made plain in John's Gospel and in Paul's writing. From what I understand there was no need to spell this out in the earlier Gospels because it would have been already understood by the readers but by the time John wrote his Gospel it had to be said plainly to stop the church wandering into heresy.

What fascinates me wasn't in the book at all. If Christ existed before the incarnation it means that He was in the Godhead during the act of creation. But God is beyond time so in the act of creation He knew that He would have to enter creation and suffer and die. Despite this He still did it because He loves each and every one of us that much.

I feel that I should leave the light reading behind now so the next book I'm going to read is "The Gospel According to the "Simpsons": The Spiritual Life of the World's Most Animated Family"

God bless you all.

Posted by Still Breathing at 19:29 No comments:

I have just entered my Peak Flow (lung function test) figures for November into the 2010 spreadsheet and I noticed something about the annual graph: 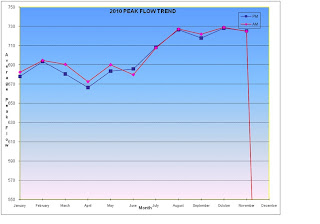 Apart from the fact that I haven't entered the December figures it starts rising in July which is when I started taking fluoxetine for my depression. Does this mean that fluoxetine helps treat asthma or that fluoxetine relaxes me so that the stress is no longer an asthma trigger?

Any views?
Posted by Still Breathing at 12:36 2 comments: