The Parable of the Tree

Back in May this year I was walking through a local park when a voice told me to "Turn aside and look at that tree."  I stopped in my tracks and turned round and this is what I saw: 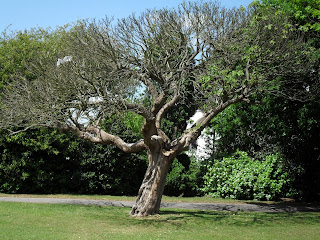 All the trees were in full leaf except this one.  I walked over to it to get a closer look and I noticed that there were green leaves and life in a small part of the tree: 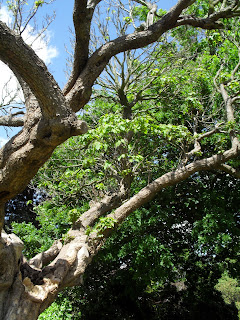 However most of the tree showed no sign of life: 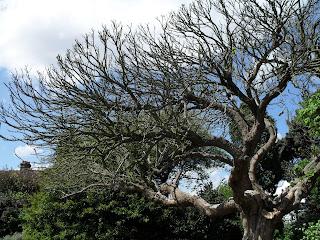 Since then I have looked at this tree every time I've gone that way and there has been no sign of life spreading to the bare branches.  Then, this week, I noticed it had been cut down so I went over to look at where it had been when the man watering some nearby flowerbeds said "They had to cut it down as the core was rotten."

Now I am sure this is a warning from God about the church but what in particular.  The church I was attending, any church which is rotten to the core or all the western church?  I don't know but I suspect it is more a warning to be careful about which church you attend.

The Need For Equality

This post could well be titled Greenbelt 2011 Part 2 as it is about a talk I went to at Greenbelt and the book I have just read as a result.  It was a talk I attended by accident but one that I found most worthwhile.  The accident was that I read the surname of the speaker and assumed that it was the same person I had heard the day before - but being stupid can have its advantages.

I want to start with a quotation that is in book from someone who had read an earlier edition and at the end I will tell you who it is!

"that among the richest countries, it's the more equal ones that do worse according to almost every quality of life indicator ... per capita GDP is much less significant for a country's life expectancy, crime levels, literacy and health than the size of the gap between the richest and the poorest in the population ... We all know, in our hearts, that as long as there is deep poverty living systematically side by side with great riches, we all remain the poorer for it."

The book is The Spirit Level, subtitle Why Equality is Better for Everyone, and it was written by Richard Wilkinson, who I heard speak, and Kate Pickett.  This, I have to admit, is my kind of book, a book full of graphs and the inferences that can be drawn from them; I didn't do Applied Statistics all those years ago because I didn't like it!  The main theme of the book is that once a country or state reaches a certain level of affluence it doesn't social problems such as teen pregnancy, drug addiction, crime, violence, bad health etc are not related to the level of affluence but to the distribution of the affluence within that country or state.

Have you worked out who was been quoted in the book? It was David Cameron.
Posted by Still Breathing at 22:06 4 comments:

This week I read 2 stories and I immediately saw that they were linked.  Not that the authors had any intention of collaborating it's just that they both wrote, in very different ways, about what happens if you take the Bible at face value.

The first story is a brief article about a woman whole lived for a year following the Bibles instruction to / about woman at face value.  You can read the article here: http://www.guardian.co.uk/lifeandstyle/the-womens-blog-with-jane-martinson/2011/oct/06/woman-year-living-biblically


The second article was entitled "How can it be fair to say I can't be saved by God if I'm gay?" and it is written by someone with a personal experience of God in their life who just happens to be gay.  It includes this sentence "Every Sunday I walk into church to pray and receive disgusted looks from brothers and sisters." which, every time I read it makes something inside me hurt.  I hurt because it just doesn't fit with Jesus' words to us "By this all men will know that you are my disciples, if you love one another."  How much love is being shown to the author of the article?   She then poses the following question "Are the 12 mentions of homosexuality in the holy book due to cultural and historical mistranslations and misinterpretations?" which, for me, gets to the heart of the matter.  Which is more important following Jesus' command or insisting that the Bible has to be read literally.  You can read the whole article here: http://www.guardian.co.uk/commentisfree/belief/2011/oct/05/god-gay-christian-bible

For me, the Bible is very important but it has to be read remembering that we don't have a single original text and that we need to know the social context in which each part was written.
Posted by Still Breathing at 22:16 No comments:

The Problem with Drink 3

Since I posted the The Problem with Drink back in June something has bugged me, something I didn't feel was quite correct or honest.  It was this phrase:

You see I'm not sure that it's correct because I don't know when I last stopped drinking for anything but a medical reason.  I had managed to give alcohol up for Lent in the past but then when someone pointed out that you shouldn't fast on Holy Days I was 'allowed' to have a drink on Sunday.

This leaves me both with and without a problem.  I have a problem because I shouldn't, in all honesty, say I'm not an alcoholic as I don't know if I could stop drinking whenever I wanted to.  It isn't a problem because not knowing means I have to proceed as if I am an alcoholic.  Under tightly controlled conditions (birthday meals, weddings, Christmas etc) I will still allow myself a small glass of wine but that is all.  Even this may prove to be too much in the longer term and I'll have to give up alcohol totally; I just don't know.


So, for now, my answer to the question "Are you an alcoholic" has to be "I don't know, I may well be."
Posted by Still Breathing at 14:18 No comments: