The other night I woke up at about 4am and it was silent. That is so unusual in London that I noticed it. I enjoyed it; that wonderful peace of silence.

However something worried me, why hadn't I 'heard' this before? The answer was simple, I usually heard birdsong at that time but now there wasn't any.

Over the last few weeks a group of crows (or rooks - I can't tell the difference) and some magpies have been around and they have either frightened away or killed the birds that sang. All that is left are sparrows, pigeons, starlings and martins; birds that don't sing to proclaim their territory.

In a way that is what it's like living with depression; everything goes on as normal but the birdsong is missing.

P.S. Is a black bird called Sid James a Carry On Crow?
Posted by Still Breathing at 11:59 No comments:

Drifting with the Tide

Something you tend to hear every now and then in Christian circles is that if you aren't making progress in your Christian life you are going backwards. That may, to an extent, be true but it does result in pressure to be always progressing and then to feeling like a failure if you don't feel you are progressing (still with me?)

In my current situation my life is in limbo until I find out whether or not I will be returning to work. However that is beyond my control and so I have thought of myself as drifting. I then remembered the Thames Lightermen who used to move loads up and down the river on barges using just the tide; they were drifting but drifting in a controlled manner and so drifting began to seem to be something constructive.

I am still drifting but now I can accept that as a pause between activities; a time to prepare for the next stage.

Yet again I have tried to write this as a poem.

So I drift.
Drifting on to...
Who knows where.

But drifting is moving.
Moving slowly.
Moving on.
Into the unknown.

Then I will hoist my sail
And move forward.
Purposefully.

Back on the Pills

It has taken me a few weeks to pluck up courage to write this blog. There is something very personal about trying to write about your own mental illness which doesn’t happen when writing about physical illness; it’s as if you can separate the body from who you are but not the brain.

Anyway here is the update. I’m back off work and back on the pills again – there I said it.
This sounds a bit like failure so I better expand that a bit because, very oddly, it still feels like I’m making slow progress.

To go back to work I took a risk and came off the Citalopram so I could be awake all day and found that my mind was clearer without it. Things seemed to be going OK but what I didn’t realise was that I was walking a tightrope and it was only going to take a small push for me to lose my balance. That push came in the form of a move to ‘hot desking’ where, in theory no-one has a set desk and you keep all your papers etc in a locker and find a free desk when you come in. As it turns out they allocated 17 desks for 18 of us and those desks were allocated to 17 designated members of staff – guess who didn’t get one. This made me feel totally excluded and was more than my fragile mind could manage so, after 2 attempts to work, I went back to the doctor and haven’t been back to work since.

The doctor said I needed longer on some form of antidepressant and, after some discussion, I ended up on fluoxetine which is a newer drug than Citaopram and, so far, doesn’t seem to have as many side effects. I don’t know what is going to happen about work but I have agreed to have another meeting with the occupational health doctor. What happens after that is outside my control and so I’m waiting to find out what happens. Through all of this I have remained aware of God being with me and so I’m trusting Him to show me the way ahead.

One thing that has helped me examine my condition is to write poetry; I don’t claim it is any good but it does reflect how I see things at that moment. Here, in case it helps someone else in the same position, is my latest effort.

Alone,
I’ve always liked to be alone.
Alone with myself,
My thoughts,
My ideas.
I like solitude.

But somewhere it went wrong.
I wasn’t alone
I was on my own.
Lonely

When did it change?
How did it happen?
Why did I lose touch?
Where’s the way back?

Questions.
But no answers.
I’m alone in my box.
But I like being alone
Provided no-one disturbs me.

Slowly, Oh so slowly
I realised someone was with me.
Even in my box.

You where there.
Saying nothing.
Not telling me I was wrong.
Not nagging.
Just being.

And so you stayed with me.
Your very presence spoke more than words.
You understand.
You have been there.
No words convey that.

P.S For those who don’t know fluoxetine is better known as Prozac!
Posted by Still Breathing at 20:23 4 comments:

This evening I bought a few items at Sainsbury's including my 'medicinal' chocolate and some wine. The cashier has carefully looked at me and confirmed that I was over 18 as shown on the receipt: 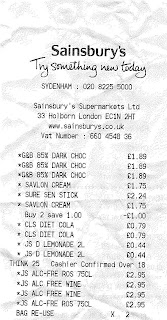 However did you notice what I bought? Yes it was 4 bottles of alcohol free wine! I was age checked to buy alcohol free wine - the only type I'm allowed on my current medication.
Posted by Still Breathing at 21:45 1 comment: