E-bay just sent me an e-mail suggesting a product they thought I might want - hair straighteners! If you don't know why that's funny here is a picture of our wedding day 29 years ago. 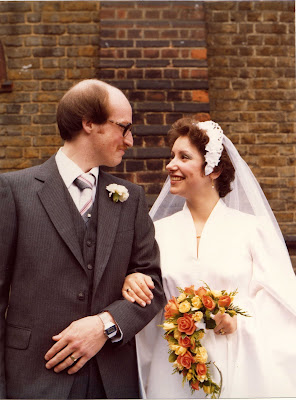 It's about as appropriate as the time I won curling tongs in a raffle!
Posted by Still Breathing at 09:33 1 comment:

I've been thinking about, and experiencing, bereavement over the last couple of days and what that means to a Christian.

Firstly I don't think it is wrong to grieve Paul, in one his letters, talks about someone nearly dying and how it would have added to his grief (sorry - can't find the reference) so if he could feel like that so can we. But why? As Christians we know that when we die we go to a better place so why not rejoice when a fellow Christian dies? Perhaps the answer is that they have ceased to be a part of the Body of Christ here on earth and that part can never be replaced.

John Donne put it better than me in this poem:

No man is an island, entire of itself
every man is a piece of the continent, a part of the main
if a clod be washed away by the sea,
Europe is the less, as well as if a promontory were,
as well as if a manor of thy friends or of thine own were
any man's death diminishes me, because I am involved in mankind
and therefore never send to know for whom the bell tolls
it tolls for thee.
Posted by Still Breathing at 20:49 1 comment:

Last night I went to my first ever Prom Concert at the Albert Hall. My daughter arranged it all so after a picnic by the Albert Memorial we made our way across the road to the Albert Hall for the best concert I have ever heard - Barenboim conducting the West-Eastern Divan Orchestra in Liszt (Les préludes) Wagner (Tristan and Isolde - Prelude and Liebestod) and Berlioz (Symphonie Fantastique).

The Symphonie Fantastique is one of my favourite pieces of music but what made is special is the orchestra. The West-Eastern Divan Orchestra is made up of young Israeli and Arab musicians playing together to produce a unified performance. Talking about the orchestra Barenboim says "I'm not trying to convert the Arab members of the Divan to the Israeli point of view or seeking to win over Israelis to the Arab one but I want to create a platform where the two sides can agree, and not resort to knives."

If last night's concert is anything to go by there is hope that good people on both sides can work together to resolve the situation between the Arabs and Israelis.
Posted by Still Breathing at 22:17 No comments:

Berries on the Trees

As they are working on the tram network I have a longer walk once I get off the tram to get into the office and a lot of this is along a tree lined road. Travelling at walking pace I found I noticed a lot more around me in particular the number of bright red berries on some trees.

This reminded me of a saying of my grandfather, a farmer brought up in the market town of East Grinstead (now a commuter town). When he saw a tree laden with berries he would say "It's been a good year for berries."

I have heard town folk claim that a lot of berries means that nature is providing for a hard winter to come; a very romantic view of nature. My grandfather new better, nature only reflects what has happened.
Posted by Still Breathing at 08:37 No comments:

A Sunday School teacher was discussing the Ten Commandments with a class of 5 - 6 years olds. After explaining the commandment 'honour thy father and mother' she asked "Is there a commandment that teaches us how to treat our brothers and sisters?" Without hesitation one little boy answered "Thou shalt not kill."

With thanks to Beattie in The Baptist Times.
Posted by Still Breathing at 08:26 No comments:

A Sad Day For Guitarists

The death has been announced of Les Paul, the man who not only gave us the Les Paul Gibson Guitar but also was the first to use mulitrack recording.

A couple of news items caught my attention today. Firstly there was this:

So far the response from the families of the victims has been mixed. Some say this is the compassionate thing to do others that he should serve his time as punishment / retribution for what he did. Leaving aside whether he did do it (there is some doubt) I wondered whether it was the sign of a civilised country to not only look for retribution but to also be compassionate to a dying man. All this was before it became apparent that, in general, those who thought he should be released were British while the families of the USA victims seem to all think he should rot in jail. Any thoughts?

Then there was this:

So the French government wants to ban a woman wearing something in public that is part of her religious belief. My question is does any civilised country have the right to deny someone the right to practice their faith in a way that doesn't do anyone any harm?
Posted by Still Breathing at 22:04 No comments:

The Bible - The Word of God?

The first time I heard someone suggest that the Bible isn’t “The Word of God” I thought they were mad, stupid, a heretic or all three. I had been taught in a Baptist Sunday School and subsequently in the church that The Bible was God’s Word and that the Christian faith was based on this and nothing else. However, the people who said that it wasn’t were people I knew and respected so it wasn’t easy to dismiss the idea.

The first point to note is that this isn’t an historic way of describing and looking at the Bible; it only appears in the Protestant church at the time of the reformation. The Synod of Trent, an attempt by the Roman Catholic Church to counter the reformation, had declared that unwritten church traditions had an equal authority with the Bible and, in reaction to this, the reformers declared that the Bible was the only authority. It was probably this that led them to refer to the Bible as “the Word of God” even though the Bible makes no such claims for itself. .

The phrase does appear in the Bible; usually when referring to Spirit inspired prophetic utterances in the Old Testament calling God’s wayward people back to Him. These are specific words from the prophets to God’s people and not a reference to the Old Testament as a whole.

Notice that “the Word was God.” – nothing more and nothing less.

“The Word became flesh and made his dwelling among us. We have seen his glory, the glory of the one and only [Son], who came from the Father, full of grace and truth.”

The Word of God is God Himself who became human and walked this planet as the man Jesus. As mind shattering as this is I believe it goes a stage further; if Jesus is the Word of God so is the Holy Spirit who dwells in us. I am not saying that everything a Christian says is God’s Word but there are times when the Holy Spirit works through us to speak God’s Word into a situation.

So is the Bible the Word of God? I don’t think so; I think that is to limit the power of the Holy Spirit at work in the world today.

I believe that God the Holy Spirit can speak to us through the Bible in ways we cannot understand or foretell, surprising us and pointing us to Jesus, God in human form, and guiding us to live our lives like His. In view of this I believe that reading and studying the Bible are an important part of the Christian life.
Posted by Still Breathing at 15:52 2 comments:

On the bright sunny day of our holiday I took this picture of the Green Man: 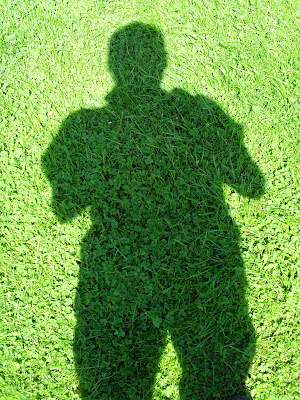 Posted by Still Breathing at 16:24 No comments:

I’m not sure why the idea came to me but I felt I ought to blog a bit about what the Bible is and what its rôle is in the journey that we call the Christian life. I hope that means it was the Holy Spirit’s prompting

I am not a theologian or Bible scholar just someone who was brought up in the church and has thought and read about Christianity since his mid teens. As a result these blogs can only be my understanding of what the Bible is at this point in time; I would have written differently in my teens and, I hope, I would write differently if I re-visited the subject in 10 or 20 years time.

The subjects I’m proposing to look at (briefly) are:

Any other ideas are welcome but I don’t guarantee that I will be capable of including them.

To try and avoid misunderstanding I will end each blog with a statement of why I think the Bible has an important rôle to play in the Christian life. This is not set in stone so it may change.

I believe that God the Holy Spirit can speak to us through the Bible in ways we cannot understand or foretell, surprising us and pointing us to Jesus, God in human form, and guiding us to live our lives like His. In view of this I believe that reading and studying the Bible are an important part of the Christian life.
Posted by Still Breathing at 11:24 No comments: 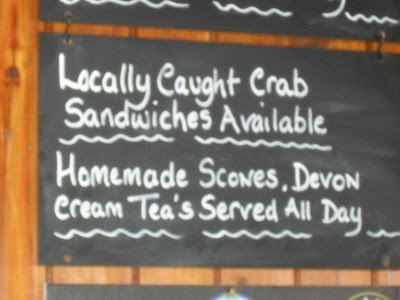 Can someone tell me how to catch a sandwich? Is it quicker than making them yourself?

Incidently the same establishment had "Half Roast Chicken" on its menu.
Posted by Still Breathing at 10:50 1 comment:

I'm having trouble getting my holiday photos up onto Facebook so I thought I'd put a few up here and, hopefully, tell you what they are. I only got the camera the week before the holiday have discovered that I can use a digital camera despite the asthma medication shakes that stopped me using our film camera years ago. 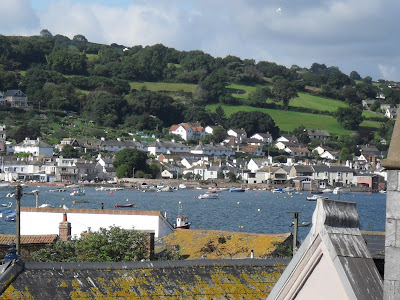 The view from the bedroom - attempt 5. 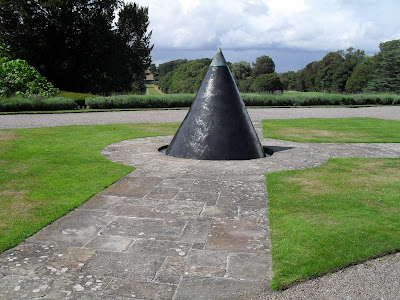 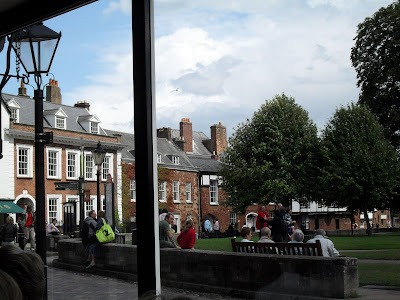 View of Exeter Cathedral Close taken from my lunch seat in a pub. 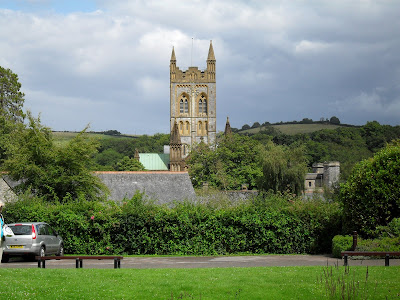 Buckfast Abbey - the only Catholic Abbey in the UK brought back into use since the reformation. 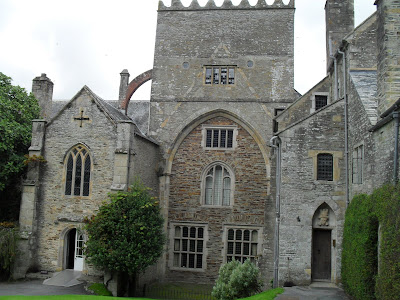 Buckland Abbey - home of Sir Francis Drake and the only example of an abbey church being converted into a house.
Posted by Still Breathing at 14:46 1 comment: