Yesterday I threw out most of my running gear.  This was not a deliberate attempt to take up a sedentary lifestyle but a recognition that A) most of it was no longer usable and B) that I was very unlikely to be able to use it again.

For a few years during my 30s I was a keen runner, getting up early each weekday to run before breakfast and running 10 miles home from work one day and 10 miles back the next.  Then it all changed.  In 1995 I was training for my fourth marathon when I went in a month from doing 16 mile runs to hardly being able to walk up a flight of stairs.  Slowly the reasons became apparent, my asthma was out of control and I had acid reflux (later shown to be caused by stomach ulcers) but I didn't get better.  I was plague by chest infections and every time I tried to get back to running I would fall ill with yet another infection.  Eventually, after about 12 years, I was diagnosed with bronchiectasis (dead areas of lung) and put on medication to keep it under control and although this has improved my health it hasn't been enough for me to go back to running.

The first few years after I stopped running were the worst as I thought I'd soon be able to start running again and each time I went for a run and then fell ill was like a hammer blow.  At this time I couldn't bring myself to clear out my running gear as it seemed like an admission of defeat.  So I said I'd leave it for 10 years, then 12 and then 15 but each time I couldn't bring myself to touch it as it felt too painful.  Now, 17 years on, it felt right and I don't have any regrets about what I've done.

Now is the right time because I have finally accepted that my running days are over as my lungs just won't take the stress.  Of course I could have got rid of it ages ago but I would always have wondered about whether I could have got running again.

When life serves up disappointment it is easy to tell yourself to get over it and to move on but that isn't always the right thing to do.  Sometimes you have to let the pain and disappointment run their course until one day you realise it no longer matters and you can get on with the rest of your life.
Posted by Still Breathing at 15:05 2 comments:

After my last post someone pointed out that the Mersey Ferry analogy made it sound easy to manage depression.  If that was the case I'm sorry because that was never my intention; I was just trying to share something that I have found helpful but far from a cure.  As I said at the time I have been only partly successful in using this advice as while I notice if my mood is artificially high I don't notice when it starts to slide downwards.  My motivation for writing the post was that I realised that I had been on a downward path for some months but hadn't noticed it until it started to become a problem.  As I battled with how I had let things slip so easily I wrote this:

I didn’t notice the gentle slope
Beneath my feet

I didn’t notice the slope get steeper

Until it was too late

And as I looked up
I thought
“How did I get here?”
Posted by Still Breathing at 13:05 2 comments:

As far as I can tell I have been living with depression for around 40 years but it is only in the last couple that I have been receiving help and treatment; it took a complete breakdown to get me to that point.

One of the misunderstandings about depression is that it is all about feeling down and miserable but you can be like that without depression.  Depression is where you don't control your emotions but they control you so you swing between highs and lows without being in control.

The most useful advice I have received is this: 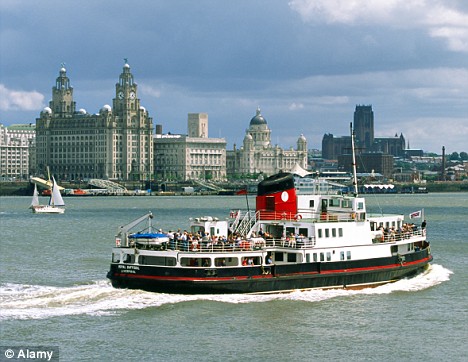 For those of you who don't know this is the Mersey ferry which crosses the river Mersey between Liverpool and the Wirral.  What is important about the ferry is that the river is tidal which makes it harder to steer the ship directly from one side to the other.

Now I'm not saying I've mastered this because so far all I am able to spot when I'm getting too 'high' and have been able to bring myself back to an even keel. (Too high is dangerous because it leads to a crash.)  So far I'm not very good at noticing the much slower signs that lead to a 'down' but I'm learning.
Posted by Still Breathing at 15:49 No comments: